Ongoing congestion for the port of Hamburg

Caused by constant vessel delays, there’s an increasing congestion up off Heligoland. According to the logistics group HHLA, ten ships are currently waiting for clearance in the port of Hamburg – possibly for weeks.

Disruptions in the global supply chains lead to problems in the ports – Hamburg is now feeling the effects of this too: as a result of long ship delays, the containers are backing up at the terminals, which leads to the warehouses being overloaded.

A whole slew of ships currently must wait off Helgoland until they can berth in their destination port. it can take from a few days to a few weeks until they’ll get a free place. Despite all efforts and a large deployment of personnel and technology, there are delays in processing.

How did these problems come about?

Initiated by the corona pandemic, there have been disruptions in supply chains worldwide for two years now. As a result of lockdowns in large Chinese cities, operations in the ports there have been repeatedly interrupted, why sailings got delayed. If the “traffic jam” then clears, the wave will arrive in Europe a few weeks later.

Hamburg terminals managed such situations well over the past two years. However, the ongoing ships rotations got out of control due to other events – e.g. days-long blockade of the Suez Canal by the “Ever Given”, bad weather and most recently due to Russia’s war against Ukraine.

Terminals like HHLA has already occupied additional areas with containers but reaching their limits the longer the situation in the supply chain remains tense. The more containers there are on the terminal, the greater are the effort of handling and the longer it takes to be cleared. Average it used to take 500 meters to move a container from its storing position on the terminal to the ship. Today this could increase up to 1.5 kilometers – depending on where the container is. 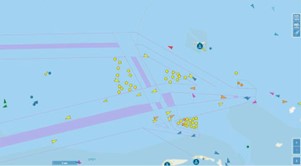 The severe lockdown in Shanghai threatens to get a grip on the Netherlands as...
Scroll to top